Stories from the frontlines of climate hope

All over Europe, people are rising up to fix climate breakdown – demanding urgent transformation to a fair, fossil free future. Communities, cities and people are at the forefront of building community-owned renewable energy, creating green jobs, and tackling energy poverty.

Here is one such story from the frontlines of climate hope, from Ukraine.

A phoenix from the ashes

The 2011 nuclear disaster in Fukushima, Japan, is still fresh in our minds. But the worst nuclear accident ever remains the one that destroyed the Chernobyl Power Plant in Northern Ukraine in 1986, causing over 10,000 deaths and remaining health impacts all over Europe. On the accident’s 34th anniversary in April, which was overshadowed by wildfires in the radiation-contaminated exclusion zone, Ukraine’s president paid homage to the “heroes who saved the future from the danger of radiation”.

The phoenix that rose from the ashes is the city Slavutych, today boasting a remarkably young population of 25,000. Slavutych was purposely built for the evacuated employees of the power plant and their families, and from the start full of highly skilled engineers, technicians and new ideas. 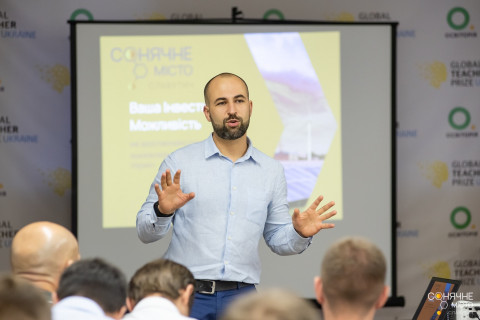 In summer 2018, a group around Andrij Zinchenko decided to change the image of the region and brought their proposal to the mayor of Slavutych. “Instead of clinging to the Chernobyl memory, we wanted to reinvent the city. In a spirit of self-reliance, we wanted to show you can care for the community while providing an economical opportunity for everyone.”

How Slavutych switched to community power

With the mayor’s support, Andrij and his friends built up Sonyachne Misto, the SolarTown in the city of nuclear engineers. The grid is owned by the city, not by a bigger private provider. SolarTown demonstrates perfectly how energy innovations can provide benefits for the community due to energy-saving, local renewables, easier grid connection procedures and education programs for other communities. 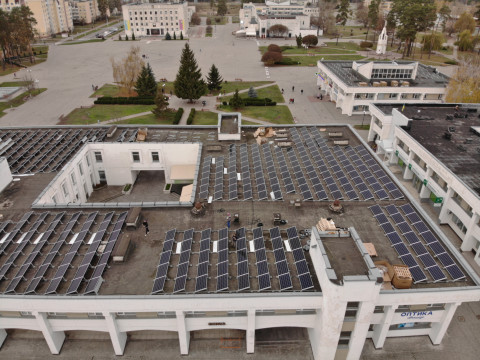 The co-operative was registered in 2018, as the first one in the Ukraine. Now, it has almost 100 members and owns three solar plants. Every shareholder starts with an investment of at least 500 EUR and every 1000 EUR invested means an annual return of about 130 EUR until 2030. This scheme makes investing attractive for a broad range of people, not only the wealthier ones.

Andrij is clear about their target audience. “People from the area could invest first. We are proud that the first investor is a local woman, an energy manager, and two of our largest shareholders are in their 20s.”

He insists that SolarTown is not merely commercial, but a project with great social impacts. “SolarTown gives away 5% of its annual income for city development. This is an integral part part of its statute and philosophy.”

The key to a huge success

The team of SolarTown, with the help of local engineers, has successfully completed the construction of all three planned solar power plants through raising 145,000 EUR in just four months. They are preparing all relevant documents for permits and licenses to finally launch the project very soon. The key to their amazing success?

“A good financial plan, a legal model, a permission from the local provider and support from the mayor and the community. But the most important is transparency - we show all our plans to everyone and answer every question openly.”

While Andrij put a critical amount of energy into that project over the past few years, the mission to create a flourishing community with a future-proof energy model continues to motivate him.

SolarTown is an inspirational example. People overcame their personal limitations and are eager to do something bigger together. They reversed and reinvented the concept of a whole city, found their freedom in uniting and creating their own future with and for the community.

When the first profits come in, the Slavutych cooperative plans to join the European federation of citizen energy cooperatives, REScoop.eu. The team is also talking with other local communities about next projects on solar, biomass and lighting.

“We don’t want to stop here in Slavutych. We need to scale up small cooperatives. We want to show Ukrainians how to crowd-fund and initiate projects, sharing our practice of transparency and our experiences.We want to make this success available to as many people as possible.”

Just when you despair at the state of the planet, these communities show us optimism. Their solutions show us what societal transformation will look like. Together, we can make a fossil free future happen now.